How to use Interactive Rendering in Corona Renderer for Cinema 4D? Print

How to use Interactive Rendering in Corona Renderer for Cinema 4D?

To enable IR, click and hold on the "Render" button in the Corona VFB and select the "Start IR" option from the dropdown list: 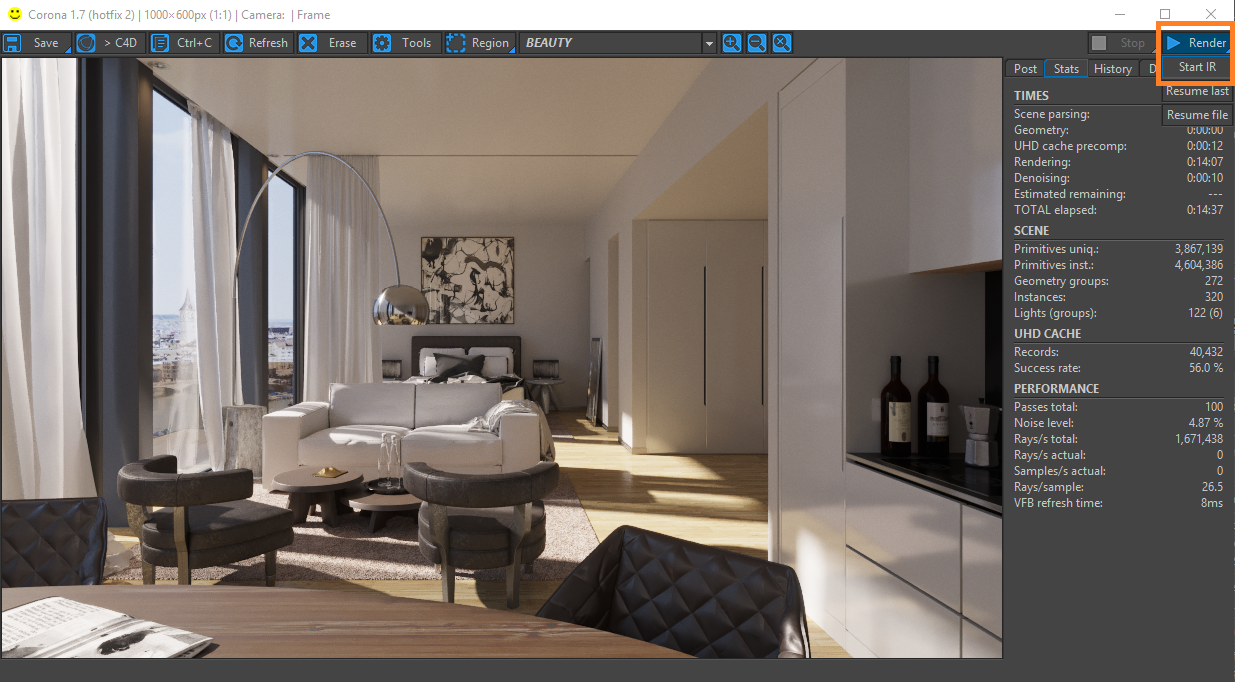 While you can only start IR from the Corona VFB, once it is running the native Picture Viewer will update in sync with the VFB.

What can you do whilst IR is running?

Once IR is running, you can:

- Distributed Rendering (Only if in use)

- LightMix (Edit and fine tune your lighting setup in real-time)

Focusing processing power on particular areas in the image during IR

Sometimes you will want to focus on a particular area of an image and do not need the whole image to update. This can be done in one of two ways:

Zoom in on the image in the Corona VFB

When you zoom in to the image in the Corona VFB (mouse scroll wheel, or the zoom in icon), only the area currently shown in the Corona VFB will be processed. This will make that area clean up faster, while the rest of the image remains "on pause". As soon as you zoom out, processing will resume on the rest of the image. Note that this ONLY applies to Interactive Rendering - you can zoom in and out during a full render and the whole image will continue to be processed.

Use Render Regions in the Corona VFB Optimizing performance while IR is running

Limit the number of cores used for IR

By default, IR uses "all your cores -1" which leaves one core free to handle anything else you may be doing on the machine at the time. You can change this to 0, to use all available cores during IR and give greater IR performance (at the expensive of some system responsiveness), or lower it to -2, -3 etc. to reduce the cores used and give greater system responsiveness (at the expense of IR performance).

You can adjust this under Corona > Preferences > Interactive Rendering section as shown below: Limit the Max Number of passes for IR

This lets you have IR stop after a certain number of passes have run. When set to 0, IR will run indefinitely - for any other value, IR will stop when that number of passes is reached, useful when you only need a limited preview quality during IR. You can change this value while IR is running (but it will always restart the render from 0 passes if you do change the value). This setting has no effect on final renders. By enabling this option, you force IR to use path tracing rather than the UHD Cache, no matter which solution is set for the final render. This can improve the start up performance of IR, as the UHD Cache will not need to be calculated. This setting will have no effect on your final render.