How to use denoising? (C4D) Print

How to use denoising in Corona Renderer for C4D?

Denoising is a feature built into Corona Renderer, which can be used to quickly make noisy images noise-free. It can significantly reduce render times by removing the need to wait until the noise refines during the rendering process. 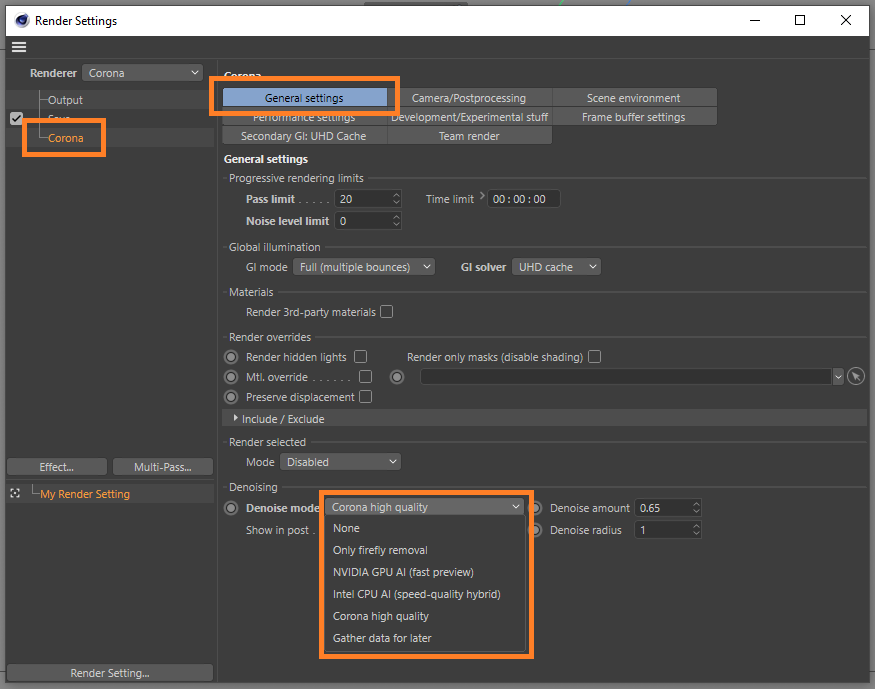 This denoiser's main purpose, as the name suggests, is to provide fast, noise-free previews. It is applied almost in real-time during interactive or regular rendering, and after the rendering is stopped. It requires a supported GPU to work (See: Hardware Requirements), which is detected during the installation.

NVIDIA GPU AI Denoiser works in a similar way to the Corona High Quality Denoiser, however, there are some substantial differences:

This denoiser combines the features of the Corona High Quality Denoiser and the NVIDIA GPU AI Denoiser. It runs purely on the CPU (it does not have to be an Intel CPU though; it works fine with AMD CPUs as well) and uses machine learning to produce noise-free results. However, it is much slower than the NVIDIA GPU AI Denoiser (seconds vs milliseconds), so it can be applied only after the regular rendering ends, not in real-time during interactive rendering.

This denoiser is a post-rendering effect that analyzes noise in the 3D space and smartly reduces it without producing splotches while maintaining sharp edges and texture details. Therefore it is not a strictly a 2D post-process. The result can be interactively blended with the original non-denoised image directly in the VFB after the rendering is finished to achieve the desired level of denoising. This is especially useful if the denoised image appears to be over-processed (generally this should not happen but can sometimes be observed, for example in case of textures with very subtle patterns and rendering a small number of passes).

The main purpose of denoising, along with adaptivity, is reducing the number of passes needed to get a noise-free image. The reported render time reductions are between 50 and 70%. Denoising also attempts to remove fireflies (single bright pixels) from the image.

Corona High Quality Denoiser is executed after the rendering is finished by either limiting the rendering, or by manually stopping it after desired time.

There are two parameters controlling this denoising type:

Saving a CXR file and denoising it later

The "Gather data for later" option can be used to skip the actual denoising process, but save the denoising data within the CXR file. Such file can be then denoised later using the Corona Image Editor. Since the denoising is calculated later, you can use this approach to try different Denoise radius values without re-rendering (otherwise, the Denoise radius is baked in at render time).

For more information about CXR file saving for later use, visit this link -> How to save a .CXR file from the VFB

Saving multiple versions of the rendering with different denoising amounts

Multiple "VirtualBeauty" passes can be used to save different versions of the same image at once with various amounts of denoising applied. This allows you to use masks (either generated from Corona or created manually) to blend between different denoising amounts in post, for example, if you wish to preserve flakes in car paint or fine bump mapping in carpets that might need a lower denoising level than other parts of the image. Individual denoising amount is specified in the properties of each VirtualBeauty pass regardless of the in-VFB setting: Multiple VirtualBeauty elements visible on the Corona Multi-Pass list. The denoising value of each of the passes is different than the currently set "denoise amount" in Corona VFB. Click to enlarge.

Denoising can be applied to other passes too by enabling the "Apply denoising also to this render element" option in each pass's settings.

Below are some examples where denoising greatly improves image quality:

1. Denoising on and off 2.2. Denoise radius: 0,25
Denoise amount: 1
Note that the details are sharper than with default settings, but there are some artifacts visible.